If you are unsure about following The Outsiders or Rumble Fish stars on social media (Emilio, sort your Twitter account out!) , I fully recommend following Matt Dillon’s Instagram! Here are five reasons why: 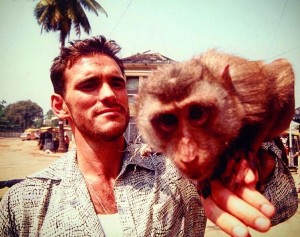 On the set of his music video directing debut

Over the course of his long career, he has worked on a lot of great films with fantastic co-stars and legendary directors. Here Matt shows Toby Jones rocking some shades as they promote Wayward Pines, standing with William Burroughs and Gus Van Sant, holding Jade his City of Ghosts co-star or waltzing with Peter Farrelly on the Something About Mary set.

Travel
Ever since first leaving the US to attend a promotional Japan tour for My Bodyguard, Matt loves to travel.
Fortunately, he loves to document it as well, sharing images that are amongst my favourites!

His photos show streets in Rome, kids playing in Paris, prayer flags in Bhutan, location scouting in Cambodia, or checking out the view in Vietnam.

Philanthropy
Matt’s travel takes him all over the world and he has seen the effect of refugees being displaced first hand.

Whether he reposts magazine articles, helps build housing in Africa, plays with kids in Cambodian orphanages or attends fundraising galas for African hospitals, Matt uses his time to spread awareness and he is now a spokesperson for Refugees International. Be sure to check out their important work and donate if possible, I donated last Christmas for this worthy cause.

Music
Music is one of Matt’s great passions ever since toting his boombox around the streets of NYC.
Matt’s real passion is Afro Cuban jazz and he collects vinyl. He also posts videos of his drumming sessions!
His love for the music has resulted in a documentary being made on El Gran Fellove, the charismatic Cuban musician. Matt has talked about directing this passion project of his, saying “I want to be more proactive; to do the things I’m excited about as an actor and director as opposed to just being an actor for hire.”

Matt shows tantalising teasers such as photos of people he has met in his research, interviewing other legendary muscians and little video snippets as they are still in the editing process. As El Gran Fellove sadly passed away in 2013, this documentary will show his legacy and the impact he has had on music. I look forward to seeing it when it is released.

He takes a great selfie! Whether he’s using an old school film camera, posing in a mirror or on an Italian bike ride, he finds the time to stop and share!

Matt also posts great examples of other photographers too, (he recently spoke with the legendary Bruce Davidson at the New York Public Library) so in Matt sharing work he likes by others, there is something for everyone to check out and be inspired by.

Matt crossposts his photos to his Facebook page, so if you don’t have Instagram, you won’t miss out!

This site uses Akismet to reduce spam. Learn how your comment data is processed.

Previous Post
Next Post
Copyright © 2022 You're On The Wrong Side Of The River. Proudly powered by WordPress. BoldR design by Iceable Themes.